Tribute to Adrian Spitzer: A Visionary in Developmental Nephrology 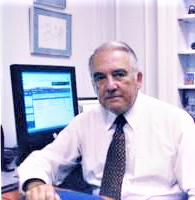 Adrian Spitzer (born December 21, 1927; passed December 27, 2021), past President, American Society of Pediatric Nephrology, was from Bucharest, Romania, and graduated from the Carol Davila University of Medicine and Pharmacy in Bucharest, Romania in 1952. He initially practiced pediatrics in Bucharest. With his wife Carole (born September 15, 1928; passed December 5, 2021), and their seven-year-old son, Vlad, they journeyed to Paris, France while awaiting approval to come to the United States. While in Paris, with a limited knowledge of the English language, Adrian studied for his United States Medical Licensing Exam. In 1963, immediately following the assassination of John F. Kennedy, Adrian, Carole, and Vlad arrived in New York. They were met at the airport by family, who had received notification that Adrian passed his licensing exam. It was upon his arrival that he first learned of this news.

Adrian completed a transitional year of internship at White Plains Hospital, New York in 1964 followed by a residency in pediatrics at the Hospital Medical College of Pennsylvania in 1966. He became a postdoctoral fellow in pediatric nephrology in 1966-67 at the Bronx Municipal Hospital Center, (Jacobi Medical Center), Albert Einstein College of Medicine, where he met Henry L. Barnett, the Chairman and one of the visionary founders of the field of Pediatric Nephrology, and Chester M. Edelmann, Jr., Director of the newly formed Division of Pediatric Nephrology, Albert Einstein College of Medicine. He learned renal micropuncture in the laboratory of Eric E. Windhager at the Medical School of Cornell University and published on the effect of peritubular oncotic pressure changes on proximal tubular fluid reabsorption in the American Journal of Physiology in 1970. Adrian joined the Faculty of the Albert Einstein College of Medicine in 1968 to establish his research career in developmental renal physiology and became Director of the Division in 1973 when Chester M. Edelmann, Jr. became the Chairman of the Department of Pediatrics at Bronx Municipal Hospital Center, Jacobi Medical Center. He remained Director until 1999 when he became an Emeritus Professor in the Division.

Upon arriving in New York, Adrian appreciated the significance of Henry Barnett’s interest in the central role of the developing kidney in human maturation. Adrian understood the importance of rigorous training of pediatric nephrologists by experienced renal physiologists who could provide the necessary mentorship to these pioneer subspecialists. From the beginnings of pediatric nephrology in the 1960s through the 1970s, the small number of academic pediatric nephrologists lacked a forum for interdisciplinary communication, and had to present their findings at early meetings of adult nephrologists. Recognizing the need for such an organization, Adrian convened an inaugural meeting in New York in 1980, the First International Workshop on Developmental Renal Physiology. He invited 100 participants, including physiologists and morphologists, as well as adult and pediatric nephrologists. The resulting interactions were so successful, under Adrian’s leadership they fostered a series of meetings every 3 years that became sponsored by the International Pediatric Nephrology Association (IPNA), with publication of the proceedings in Pediatric Nephrology. In 2003, Adrian reviewed progress through the 8th Workshop (that by 1995 was renamed International Workshop on Developmental Nephrology to include cell and molecular biology). He concluded that as he had hoped, the kidney had become recognized as an organ “more complex and attuned to the needs of the growing organism than envisaged in 1980.” (Spitzer A. Twenty-one years of developmental nephrology: the kidney then and now. Pediatr Nephrol 18:165-173, 2003). In 2014, Chesney and Chevalier looked back over 33 years of Workshops (Chesney RW, Chevalier RL. Thirty-three years of progress: the International Workshops on Developmental Nephrology and the role of IPNA. Pediatr Nephrol 29:499-504, 2014). By 2018, the 14th Workshop had been held in Ein Gedi, Israel, with a marked shift in techniques now including epigenetics, organoids, CRISPR, and single-cell RNA-seq.

Adrian’s seminal contributions to the burgeoning field of developmental nephrology grew from his meticulous physiologic studies of glomerular and tubular maturation. Upending the widely-held conviction that compared to the adult kidney, the neonatal kidney is limited in its response to homeostatic stressors, his studies demonstrated conclusively that the developing mammalian glomerulus and tubule are superbly adapted to promote somatic growth by retention of sodium and phosphorus. His scientific impact can best be appreciated by his many publications characterizing the central role of developmental renal physiology in our understanding of sodium and phosphate homeostasis in health and disease. His research utilized methodologies such as renal micropuncture, isolated perfused kidney, renal vesicles, cell culture, and molecular biology techniques for the study of renal sodium homeostasis, maturation of renal hemodynamics, and renal phosphate handling during development. He was continually funded for over 32 years from the NIH. He participated in numerous extramural review committees including the Medicine B Study Section of the NIH, the National Kidney Foundation, and was Chairman of the Pediatric Nephrology Board of the American Board of Pediatrics.

This consummate basic investigator also distinguished himself with his leadership in the International Study of Kidney Disease and orchestrated the International Study of Vesicoureteral Reflux in Children. As the Director of the Division of Pediatric Nephrology of the Albert Einstein College of Medicine and its NIH T32 Training Grant for over 35 years, he guided the career training of many trainees, some of whom became outstanding principal investigators in Pediatric Nephrology including George Schwartz, Lisa Satlin, Rick Kaskel along with many others. He inspired all of his trainees to appreciate the value and integrity of scientific inquisition and to appreciate its contribution to the improvement of health for all children, especially those afflicted with kidney disease. He stressed the importance of understanding the finest details of renal physiology as the foundation of treating complex renal diseases.

Many of you will remember the rich environment for education that emanated from the collaboration of Henry L. Barnett, Chester I. Edelmann Jr., Ira Greifer and Adrian Spitzer. This most certainly was the strongest assembly of pediatric nephrology visionaries at one institution in our early history as a subspecialty. Over the past 60 years, approximately 135 pediatric nephrologists have been part of this family of professionals whose careers have been modeled and facilitated by the life-long learning they experienced under Adrian’s mentorship. The impact of Adrian’s mentoring extended far beyond his Einstein family. Through his extensive networking across institutions and disciplines, as well as his leadership roles at the NIH and on editorial boards, he promoted academic pediatric nephrologists across the world. He was a recipient of numerous acknowledgments including the Founder’s Award from the American Society of Pediatric Nephrology and the Henry L. Barnett Award from the American Academy of Pediatrics. Most recently, the ASPN recognized his contributions with the establishment of the Adrian Spitzer Honorary Lecture in Developmental Renal Physiology. His passing is a great loss for our profession, yet his legacy will endure long into a future and will serve to brighten the future for children with kidney disease. Adrian believed in the promise of pediatric nephrology and its ability to see through to the day when children no longer suffer the perils of kidney disease. He is survived by his son Vlad, daughter-in-law Denise, and their son Max.