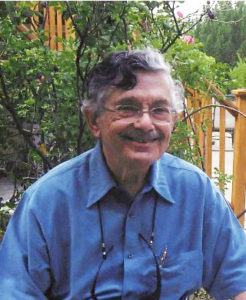 Whether we refer to his deep-seated honesty of purpose or investment of one’s skills and efforts to produce the finest result, Chester M. Edelmann belonged to the best among us. He was born in New York City in 1930. His father was an accountant, and his mother a teacher. From one he probably inherited the compulsion for the exact, and from the other the tenacity, the determination. But his role model was his grandfather, nicknamed “Doc”; he practiced general medicine in Upper Manhattan. Chet went to Columbia College and then to Washington University in St. Louis, leaving behind his sweetheart, Norma. After the second year of medical school, he returned to New York City to finish medical school at Cornell University and get married. Set on a general pediatric practice, he jumped on the opportunity to move to the Bronx Municipal Hospital Center, the teaching hospital of the newly created Albert Einstein College of Medicine, where Henry Barnett moved from Cornell to assume the Chairmanship of the Department of Pediatrics. He became Chief Resident, and thereafter accepted a position in nephrology with Henry Barnett. A disputed topic at the time was the protein content of infants’ formulas. In a landmark article, published in the Journal of Clinical Investigation, Edelmann and his colleagues demonstrated that a high protein intake lead not only to an increase in urea and water excretion, but also to an increase in concentration capacity that almost wiped out the difference previously noted between infants and children.

In 1959, Chet was called to fulfill his patriotic duty. For the ensuing two years, he served as Staff Pediatrician at the U.S. Naval Hospital, in Portsmouth, VA. At the time of discharge, Chet reached the rank of Lieutenant Commander. It was already known at the time that values of blood pH and bicarbonate in young infants are lower than in older subjects. This improperly called “physiologic acidosis” of infancy was attributed to renal immaturity, on the assumption that the kidney cannot excrete into the urine a quantity of acid equal to that produced metabolically. The work of Robert Winters and others has shown that growth results in the gain of base, as alkaline bone salts are being laid down. These observations prompted Chester Edelmann, and his collaborators (Soriano, Boichis, Acosta, Stark and Gruskin) to study the response of infants and children to ammonium chloride acidosis. The rates of excretion of titratable acid and ammonium were somewhat different in infants and children, but net acid secretion, was not significantly different in the two groups. Thus, it was demonstrated that the ability of the infant to dispose of an acid load was adequate. When Edelmann et all determined the bicarbonate threshold in infants, they found it to be lower than in adults, at about 22 mmoles per liter. Moreover, the study of the renal threshold led to the identification of proximal renal tubular acidosis.

Armed with the tools required to study the function of discrete nephron segments, Edelmann and his co-workers published in fast succession a number of articles dealing with various aspects of developmental renal physiology or pathophysiology. This flurry of publications catapulted the Division of Pediatric Nephrology at Einstein to the top of the heap. In 1969, Chet was elected into the Society of Clinical Investigation, a distinguished fraternity almost exclusively reserved to internists. By than he was the Chief of the Division of Nephrology, an Associate Professor of Pediatrics, a member of the Society for Pediatric Research, and a recipient of an NIH Research Career Development Award. In 1972, Chet received the Mead Johnson Award conferred by the American Academy of Pediatrics. That same year, Henry Barnett became Associate Dean and, shortly thereafter, Chet Edelmann succeeded him as Chairman of the Department of Pediatrics at the Albert Einstein College of Medicine. The first nephrology treatise was edited by Maurice Strauss and Louis Welt in which Chet wrote a chapter on pediatric nephrology. It numbered 12 printed pages. Somebody in the publishing house of Little Brown apparently liked the chapter and approached Chet with the proposal to write a “small book” dedicated exclusively to pediatric nephrology. The year was 1976. At the time, Chet was chairing not only the Department, but was also a member of the NIH Medicine B Study Section, who’s Chairman he became one year later. And yet, he accepted to serve as editor of the first “large book” of pediatric nephrology. The amount of work was monumental, but so was the product. The book won the Technical and Scientific Award in the Field of Medicine from the Association of American Publishers, and became the standard of reference for those working in the field of pediatric nephrology.

In 1980, Chet left the Chairmanship to become Associate Dean. As expected, his new responsibilities have often kept him away from the Division and the Department in which he grew and which he nurtured. In the ancient world, teachers were rewarded in gold. So was Chet. At the 33rd Meeting of the New Orleans Medical Assembly he received a Rex doubloon (a Spanish gold coin no longer minted) as expression of appreciation for the lecture he gave. The American Society of Pediatric Nephrology and the Academy of Pediatrics, Section on Nephrology, honored Chet with the Founder’s and the Henry Barnett Awards, respectively. These tributes carry the sentiments of hundreds of people who have benefited from the many contributions he made to academic pediatrics and pediatric nephrology, and most importantly, to our Society.

Chet is survived by his adoring wife of 60 years, Norma, three loving children: John, Christopher, and Kathy and his granddaughter, Jessica, he is also survived by his sister, Maida Heitner, and her family. He is the son of the late Nannette Lenore Edelmann and Chester Monroe Edelmann, Sr. Chet was a true Renaissance man; a lover of languages and their usage: a concert level pianist; a faithful patron of opera, the theatre and the philharmonic. He created fine furniture, was a loyal Mets fan, and enjoyed simple beauty. He was devoted to his wife and family, his patients, his church, science, his community and his country. He believed in excellence, honesty, integrity and above all, compassion. Chet was a rare man, contemplative, yet effective, who quietly found success in the improved health of his patients, in the happiness of his children and in the achievement of his students and colleagues. Chet touched the lives of countless people in many countries worldwide and will be missed by all, but primarily by his wife and children.