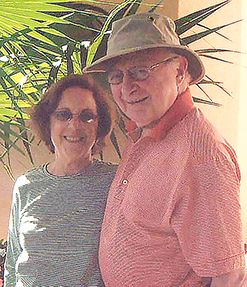 The Pediatric Nephrology community has lost a unique advocate and compelling voice for children with the passing of Ira Greifer, MD, Professor Emeritus of Pediatrics at the Albert Einstein College of Medicine. Dr. Greifer passed away on September 17, 2014, in New York City. His early career was mentored by Dr. Henry Barnett, the first Chair of Pediatrics at the Einstein College of Medicine at a time when the field of pediatric nephrology was being defined at that institution by Dr. Barnett in collaboration with Chester Edelmann, Jr. and Adrian Spitzer.

Dr. Greifer’s extensive contributions to our subspecialty encompass legislation on and delivery of health care, advocacy on behalf of children¹s needs, support of research and education in pediatrics and the subspecialty of nephrology, and advancing an international effort in pediatric health care via the International Pediatric Nephrology Association.

Dr. Greifer first came to Albert Einstein College of Medicine 60 years ago and was the former Director of Pediatrics at the College Hospital where in the mid-1960s he began developing a number of “firsts” in the country for both patients and families, including the following innovations:

Dr. Greifer was the former medical director of the National Kidney Foundation and President of the Kidney and Urology Foundation of America, and served on many scientific councils. Through his vision he made possible the funding of training fellowships in nephrology, nutrition, social work, and nursing that to date have supported over 1,000 recipients. He also was one of the founders of IPNA and served as the Secretary General.

Dr. Greifer played a critical role in the expansion of the subspecialty, worldwide. In recognition of his continued work with IPNA, Ira served as the Honorary President of the Scientific Congress in New York in 2010. The current IPNA training and educational programs represent his legacy.

Ira’s vision, leadership, and commitment to pediatrics and nephrology are appreciated around the world. He was one of the fathers of Pediatric Nephrology whose leadership and knowledge has improved the lives of countless children with kidney disease worldwide. His legacy is unparalleled and will inspire generations of practitioners and scientists to come.

By Frederick Kaskel M.D., Ph.D and Isidro B. Salusky, M.D.