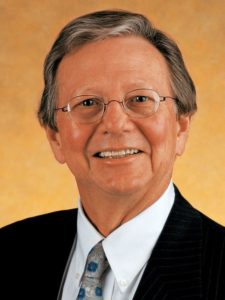 A fond farewell to a dear friend and a colleague
Tej K. Mattoo and Rudolph P. Valentini
Nephrology team at the Children’s Hospital of Michigan/Wayne State University

Dr. Larry E. Fleischmann, MD, a pioneering Pediatric Nephrologist, Professor Emeritus of Pediatrics at Wayne State University, and the past president of Children’s Hospital of Michigan, died on December 23, 2016 at the age of 79. Larry was one of the first pediatric nephrologists in the country. He did his MD in 1963 at The Johns Hopkins School of Medicine, Baltimore, followed by Residency in Pediatrics at the same institution. He spent two years at The National Institutes of Health in Dr. Fredrick Bartter’s Lab. Larry joined Children’s Hospital of Michigan (CHM)/ Wayne State University (WSU) in 1967 as Chief Resident and Instructor in Pediatrics. In 1969, he became Board certified in Pediatrics and in 1974 he was in the first batch of Sub-Board examination for Pediatric Nephrology.

Larry’s career at CHM spanned 48 years. In 1969, he established the 1st Pediatric End-Stage Renal Disease program in the State of Michigan. This included dialysis facilities for children, which he started in a converted sewing room in hospital basement.  Soon after, in 1970, he initiated the first cadaveric kidney transplant program in the State. During his tenure, Larry had numerous leadership roles, which included Chief of Nephrology, Director of Pediatric Education, Vice-Chair and Interim Chair of Pediatrics, Chief of Staff at CHM, Senior Vice President and President of the CHM, Trustee and Interim President of the Children’s Hospital of Michigan Foundation. He retired from clinical service at the end of 2015.

Larry was a brilliant clinician and a gifted educator. His fervor for spinning urine samples and doing microscopic examination during clinic visits and teaching the same to others was inspiring. Larry trained generations of medical students and pediatric nephrologists.  He was a wonderful colleague and a delightful human being with an incredible sense of humor and a unique knack of being blunt when appropriate.  Larry was also an avid and a competitive golfer throughout his adult life and won many championships. A loyal member of the Detroit Golf Club, he was pleased that he could pursue his profession yet remain competitive at “a pretty fast track.” Traveling to Cape Cod for the American Seniors Golf Association Clam Bake tournament was a pleasure he looked forward to every year. Larry’s other passion that he shared with this wife was thoroughbred horse racing.

During his career, Larry received numerous awards. These include, the School of Medicine’s “Pathfinders in Medicine” award, the College of Nursing’s “Lifeline Award”, the University of Detroit’s  ” Science Alumnus of the Year” award, the Kidney Foundation’s “Champion of Hope” award, and the March of Dimes “Humanitarian of the Year” award. In recognition of his distinguished career at CHM, last year the hospital named its dialysis center after him as the “Larry E. Fleischman M.D. Pediatric Dialysis Center”. The dedication ceremony was attended by Larry and his family and friends.
Larry is survived by his beloved wife Pat (Margaret), who he met at high school and was married to for 59 years, three sons and two grandchildren.

We are profoundly grateful for all Larry did for all of us, our program and the institution. We are far richer to have known him and will miss him dearly.

Memorial donations can be made to the Larry E. Fleischmann Nephrology Education Endowment Fund at the Children’s Hospital of Michigan Foundation http://chmfoundation.org/