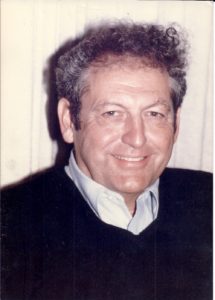 Malcolm Holliday,” Mac”, as he was known, was a major figure in pediatric nephrology from its inception to the end of the 20th Century. His early research contributed greatly to our understanding of fluid and electrolyte management, and later his work was central to our understanding of growth failure in children with chronic kidney disease.

Mac’s first foray into the medical literature was as a 3 year old patient when he had a kidney removed, secondary to chronic pyelonephritis. This operation was unusual at the time and the case was published in the Virginia Medical Journal. Years later, while serving as a consultant to the MDRD study which looked at the effect of dietary protein intake on the progression of renal disease, he was asked by eminent nephrologist whether he would become a vegetarian if he had only one kidney. As relayed by Mac, he lifted his fork with steak attached and noted with a smile, that in fact; he did have only a single kidney…
Mac was an excellent student, graduating high school and entering college at 16 and entering medical school, mid-World War II, at age 19. During the war years, medical school was shortened to three years and he graduated Alpha Omega Alpha 3 years later. On graduation day, he married Mildred Wiant, his love and constant companion for the next 63 years.

Mac’s early training was peripatetic; he interned at Boston Children’s hospital, left Boston a year later to work as an assistant resident at Vanderbilt, and then returned to Boston to work as a resident and research fellow in the laboratory of Dr. James Gamble supervised by Dr. William Wallace. Two years later he moved to New Haven where he worked under another great physiologist, Dr. Daniel Darrow. While working in Dr. Gamble’s lab, Mac and Dr. Wallace built one of the earliest flame photometers, which allowed them to determine sodium and potassium concentrations much more rapidly than by previous methods. Major questions at that time dealt with the ionic composition of body fluid compartments and their defense in the face of major physiologic perturbations. Mac’s early papers demonstrate the collaborative spirit that marked his work and he published multiple papers in with other later luminaries such as Robert Winters, Ernest Cotlove, Lou Welt, Jean Oliver and Robert Schwartz.

Mac’s first academic position was at Indiana University where in 1957, in collaboration with Dr. William Segar, they published perhaps their most widely known paper, “The maintenance need for water in parenteral fluid therapy.” While the data utilized had been published previously, this paper was original in its comprehensive synthesis of energy and fluid requirements throughout the pediatric age range. They derived a formula for maintenance energy and fluid requirements, “100/50/20,” which has stood the test of time and is still used by all who care for children. The concept behind the paper, the integration of whole body physiology, would be a hallmark of Mac’s approach throughout his career.

In 1956 he was recruited by the University of Pittsburgh to head their nephrology section. While there, he was granted a prestigious Career Research Investigator Award. These awards were United States Public Health Service lifetime research awards, which are no longer available, were granted to individual investigators so long as they remained at their original institution. While in Pittsburgh, with summers spent a the Brookhaven Laboratory, Mac’s interest continued to be in the field of fluid and electrolyte therapy; publishing papers in journals as diverse as Pediatrics and Journal of Pediatrics, Journal of Experimental Medicine, Nature and American Journal of Physiology.

In 1963 Mac, Millie and their 5 children moved to the West Coast when he accepted the position of Physician-In-Chief and Head of Research at Oakland Children’s Hospital. Forward looking as always, he worked hard to affect a merger between Oakland Children’s Hospital with the University of California, but was unsuccessful. Several years later he was asked to take over as Chief of Pediatric Nephrology at the University of California, San Francisco, a position he held for the next 27 years. There he turned his attention to the physiologic problems associated with chronic kidney disease, particularly the growth failure seen in children with this condition. In a string of papers and presentations over the next 10-15 years he demonstrated that growth failure was associated with decreased nutritional intake and that growth could be improved with caloric supplementation. He also performed laboratory studies that demonstrated that uremia was associated with abnormalities of protein turnover; studies that were later validated and extended by multiple other investigators. While nutritional supplementation is now one of the mainstays of care, it should be remembered that at the time the concept was not widely accepted. Mac also introduced the use of standard deviation scores as the appropriate reporting method for growth parameters in children with chronic kidney disease.

Active even after his retirement, Mac and Millie moved to Point Reyes where he served on the Board of Directors of the local health clinic, hiked the lovely pacific seashore, and welcomed frequent guests and colleagues. Mac’s later years were limited by progressive muscle weakness but his intellect and curiosity remained sharp up to the end. Mac published his last paper, a review of fluid therapy, in 2007 at age 83. He was an avid reader, particularly of American History and conversations with him often led to discussions of Lincoln, Jefferson and other American presidents.

During the two and a half decades that he led the nephrology program in San Francisco; his division was prominent as a center for the care of children with chronic kidney disease and a destination for a large number of trainees and visiting professors. Mac had a superb intellect and an inventive mind. He was a rigorous scientist who was always willing to reexamine accepted dogma in the face of new data.

Mac was unfailingly polite and personally quite modest. He was much more interested in the scientific quality of the work to be done rather than the credit attached to it, and was exceedingly generous with his time to both students and colleagues. Malcolm Holliday was a member of that great post-war generation of medical physiologists whose work so expanded our understanding of renal and integrative physiology. Both as a scientist and a person, he touched many of us. All who knew him mourn our loss.