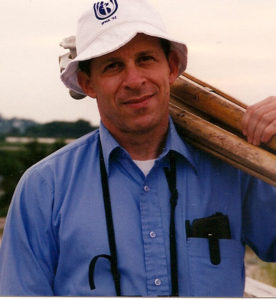 Dr. Michael Linshaw died at home on December 31, 2010 after a long illness, which he faced gallantly and with equanimity, which was his style. His loving family was present throughout his illness and at his side as he passed away.

Mike was a beloved physician, and we will greatly miss him, as will his many colleagues and patients around the world.

Mike had a long and distinguished career in pediatric nephrology as a clinician, teacher, and scientist; he was a unique person. He focused his work on the human aspects of medicine, positively influencing the lives of many children and their families, mentoring numerous young doctors, and conducting research that influenced the standard of care.

Beyond medicine, Mike was an accomplished classical pianist, chess player, bird watcher, and nature photographer. Those of us who came to know him—whether as family, friend, colleague, student, patient or just fellow traveler— were often wowed by his combination of joy, knowledge, compassion, and ethics. Mike cherished and celebrated life in his kind, quiet, and humorous way, even as he was increasingly challenged by his struggle with his illness. But even as his physical situation became insoluble, he remained vibrant and generous. He always reached out, asked those who had come to see him, “how are you?” and he asked it with genuine interest and caring.

Mike received his undergraduate degree in Philosophy at Franklin and Marshall College in 1962, and his MD from Hahnemann Medical College in 1966. After an internship at Maine Medical Center, he did his residency at the University of Vermont and then Mount Sinai Hospital in NY. He did a renal fellowship at St. Christopher’s Hospital for Children in Philadelphia, and an additional fellowship in renal physiology at Cornell Medical Center in NY. Mike was first a faculty member at the University of Kansas and then at the University of Connecticut, Tufts University, and for the past ten years at Harvard Medical School and MassGeneral Hospital for Children at MGH.

The son of the late Charles and Emily Linshaw, he was predeceased by his brother, Jack, and is survived by his loving wife Diane and three sons, Charles, Andrew and David. In lieu of flowers, please send donations in his memory to the Department of Pediatrics, MassGeneral Hospital for Children, 55 Fruit Street, Boston, MA 02114-2622.