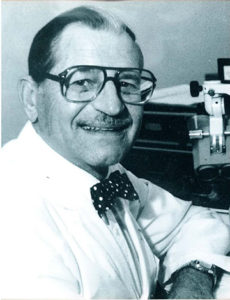 Robert Vernier passed away on May 2, 2014. He died peacefully of heart failure at his daughter’s home.

As many of you know, Bob Vernier made historic clinical and scientific contributions to pediatric nephrology research and patient care. His early leadership in national and international organizations played an important role in establishing a specialty position for pediatric nephrology. His pioneering application of percutaneous kidney biopsy and electron microscopy to the diagnosis of pediatric kidney disease continue to influence on a daily basis the quality of care provided by pediatric nephrologists. His bibliography catalogues a rich lifetime of important, innovative and prolific basic and clinical research accomplishments matched by few in our field. Bob championed the development of aggressive therapy for congenital nephrotic syndrome with the result that these children routinely survive and lead productive lives after kidney transplantation.

Bob trained several generations of pediatric nephrologists who have practiced, taught and conducted research all over the world. Through his pupils, whom he taught with infinite kindness and patience, his influence will be perpetuated indefinitely. The training program he developed with Al Michael produced well over 100 pediatric nephrologists, the great majority of whom went on to full-time faculty positions. Through the clinical and academic productivity of these physician-scientists Bob exponentially amplified his own extraordinary zeal for clinical care and research.

Bob’s legacy is assured. His name may one day fade from memory, but his influence will be felt wherever children with kidney disease receive care from knowledgeable and compassionate physicians.